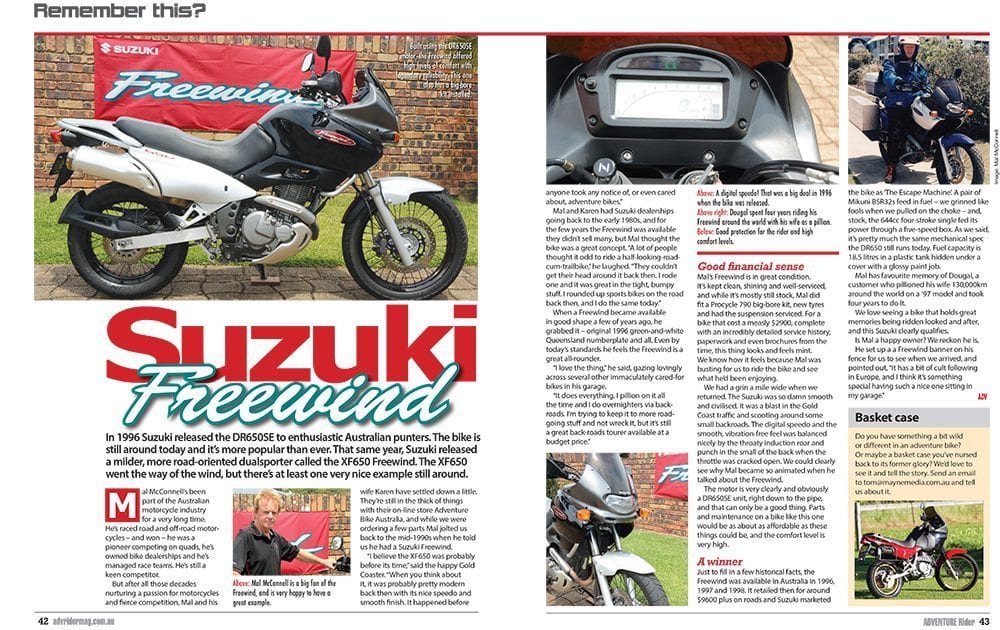 In 1996 Suzuki released the DR650SE to enthusiastic Australian punters. The bike is still around today and it’s more popular than ever. That same year, Suzuki released a milder, more road-oriented dualsporter called the XF650 Freewind. The XF650 went the way of the wind, but there’s at least one very nice example still around.

Mal McConnell’s been part of the Australian motorcycle industry for a very long time.
He’s raced road and off-road motorcycles – and won – he was a pioneer competing on quads, he’s owned bike dealerships and he’s managed race teams. He’s still a keen competitor. But after all those decades nurturing a passion for motorcycles and fierce competition, Mal and his wife Karen have settled down a little.
They’re still in the thick of things with their on-line store Adventure Bike Australia, and while we were ordering a few parts Mal jolted us back to the mid-1990s when he told us he had a Suzuki Freewind.

“I believe the XF650 was probably before its time,” said the happy Gold Coaster. “When you think about it, it was probably pretty modern back then with its nice speedo and smooth finish. It happened before anyone took any notice of, or even cared about, adventure bikes.”

Mal and Karen had Suzuki dealerships going back to the early 1980s, and for the few years the Freewind was available they didn’t sell many, but Mal thought the bike was a great concept. “A lot of people thought it odd to ride a half-looking-roadcum- trailbike,” he laughed. “They couldn’t get their head around it back then. I rode one and it was great in the tight, bumpy stuff. I rounded up sports bikes on the road back then, and I do the same today.”

When a Freewind became available in good shape a few of years ago, he grabbed it – original 1996 green-and-white Queensland numberplate and all. Even by today’s standards he feels the Freewind is a great all-rounder. “I love the thing,” he said, gazing lovingly across several other immaculately cared-for bikes in his garage. “It does everything. I pillion on it all the time and I do overnighters via backroads. I’m trying to keep it to more roadgoing stuff and not wreck it, but it’s still a great back-roads tourer available at a budget price.”